Shopping Cart
Your Cart is Empty
Quantity:
Subtotal
Taxes
Shipping
Total
There was an error with PayPalClick here to try again

Thank you for your business!You should be receiving an order confirmation from Paypal shortly.Exit Shopping Cart

MYSTERY OF A HANSOM CAB

December 1898 - a restless horse could be heard in the stable at the back of a small house on Kerr Street, Fitzroy. Although well fed and sheltered, perhaps it knew something was not quite right. The next-door neighbour, William Coffey knew something wasn’t quite right either. William had not seen or heard his neighbour, John Orange, for a number of days – so took it upon himself to check in on him. He opened the door to a small room off to the side of the stables where John lived and did not immediately see him – but on closer inspection he found him lying under his bed, facing upwards, arms to the side – John was dead.

William went at once to the police station at Fitzroy and returned with constable Andrews to the scene. On examination of the room, Andrews found that there were no signs of violence, or a struggle and that John Orange’s purse containing a little over a pound and his other personal effects were undisturbed. John was roughly 60 years of age and, according to William, had not been well in recent months. Concluding that there were no suspicious circumstances, Constable Andrews had the body removed to the Melbourne Morgue for a post mortem examination. A routine autopsy was carried out – the coroner, Arthur Wood, estimated John had been dead for about two days, his last meal being a meaty broth and that he died from the effects of bronchitis and Bright’s disease (inflammation of the kidneys).

The details of John Orange’s death were quite unremarkable, an elderly (for his time) man dying of natural causes – so why did the newspaper’s report the death of a ‘Hero’? 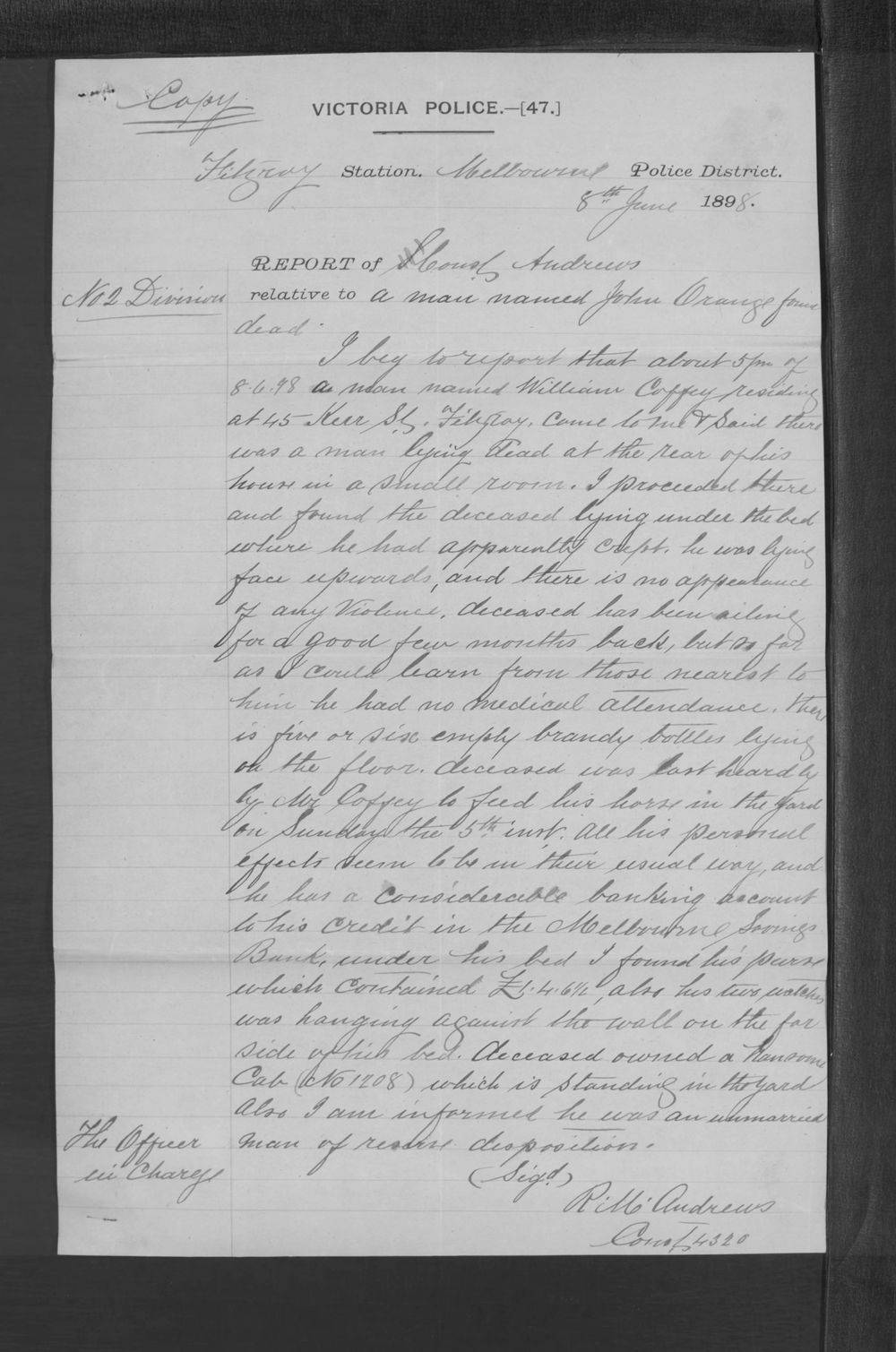 This was not the first time John Orange had made the newspapers – ten years earlier in 1888 he made news Australia wide for a little incident that took place in the early hours of an October morning on the banks of the Yarra in what was then, and still now, the ritzy suburb of Toorak.

John Orange was a hansom cab driver – that’s hansom spelt H-A-N-S-O-M, meaning he drove a particular style of cab designed and patented in 1834 by Joseph Hansom, of York. On the evening of October 7th, John Orange was hired to take two gentlemen from Government House to the home of Francis Ormond, wealthy pastoralist, philanthropist and founder of what would become RMIT. It was arranged that John would wait for the gentleman to return them home at the end for the evening. John passed the time by having a few drinks – so much so that when his passengers began their journey home, they thought it would be safer to walk then to be driven by an intoxicated Orange. The paid their fare and went on their way. John went on his way too – choosing to drive down Heyington Place, Toorak – in the direction of the river.

Wander down Heyington Place today and at the end you’ll find the Heyington Train Station, on the Glen Waverley Line. When John Orange made his trip down this road in 1888, it was a vacant block – only recently sold to the Victorian Railways for the construction of the new station. Previous to this it formed part of the garden of ‘Clovelly’, a large estate owned by Sir William Austin Zeal – which would normally have been closed off to the public. But with the transition of ownership to the Government, it appears the gates were not kept closed…so a drunken Orange and his horse meandered onto this stretch of land at the end of Heyington Place. About 45m into the paddock there was a well about 40ft deep used by the former owner of the land. Based on the track marks in the mud, it is believed that Orange narrowly avoided driving into the well. After this near miss, he dismounted and went to the nearest house to see if someone could enlighten him as to where exactly he was. He found no one and so returned to his horse and cab to make his way out of it on his own.

Orange and his horse were perilously close to the steep back down to the Yarra River and he made had the misfortune of choosing the wrong direction to make his escape from the paddock.

You can guess what happened next – over they went, horse, cab and driver down the embankment. Miraculously, John Orange managed to avoid the river, instead, he awoke a number of hours later on a narrow ledge of the embankment – his horse and cab were not so lucky. On arrival at the Toorak police station to report the accident, the constabulary did not give much credit to his story – not taking the report seriously until they viewed the scene from atop the cliff and saw tracks in the mud that suggested something certainly went over the edge.

This section of the Yarra has seen some changes since the time Orange went over the cliff into it due to the fact the river was diverted (bringing it closer to Toorak, further from Richmond) in the 1960s. 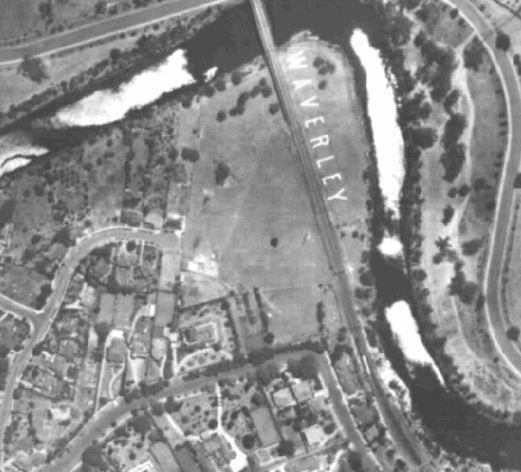 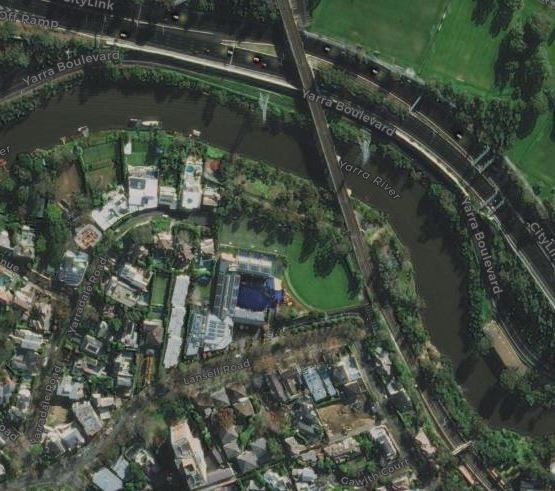 The accident caused quite a stir in the newspapers, with headlines touting “The Mystery of a Hansom Cab” – possibly referring to the mystery of how someone could survive such an accident, but most likely making reference to the popular novel published in 1886 by Fergus Hume titled “The Mystery of a Hansom Cab” a crime novel set in Melbourne – its central plot following a detective’s investigation into the death of a man found in a hansom cab, the man was murdered using chloroform.

Hume’s novel was groundbreaking in the detective story genre, published before (and outselling by the tens of thousands) Sir Arthur Conan Doyle’s first Sherlock Holmes novel ‘A Study in Scarlet’ hit the shelves in 1887. You can download a full copy in PDF format of “The Mystery of a Hansom Cab” here.

Coincidentally, a dramatization of Hume’s novel was playing at the Royal Theatre at the time of Orange’s accident – prompting one of the writers at the Melbourne Punch newspaper to ponder “How much the Opera House has paid Orange to send his cab over the cliff”!

While John Orange’s horse and cab went into the river, neither remained there for long – his horse somehow escaped its harness and made it to the Richmond side of the river, found grazing in a survey paddock the next morning, a little worse for wear but otherwise OK. The cab was retrieved from the river bed, left to dry out and driven back to Fitzroy. One report from the Australasian Newspaper in 1898 claimed that the cab was used on stage as a prop for the stage show of Hume’s novel.

In researching this story, I read Hume’s novel – and I went looking for any case that may have inspired Fergus Hume to write his novel about the discovery of a body in a hansom cab – but I could not find anything. It seems that the tale was a product of Hume’s imagination. While Hume didn’t appear to be inspired by any Victorian true crime, it does appear that he inspired one.

In February 1889 in Manchester, England – John Fletcher waved down a cab in the front of the Manchester Cathedral for himself and another young man. Just over an hour later the cab driver found Fletcher dead, and his companion missing. That mystery did not stay unsolved very long though, Manchester detective Jerome Caminada (described as the real Sherlock Holmes…) solved the case within three weeks using methods that his fictitious contemporary would have been proud of. The culprit reportedly had a copy of “The Mystery of a Hansom Cab” in his lodgings.

I wonder if John Orange had not driven his cab over a cliff all those years ago – would his death have been reported in the papers at all?

The inquest would have been held into his death regardless, but newspaper coverage may have been light on – just a few short lines in some local Fitzroy news. John had only one relative in the Colony, a widowed sister Sarah Brady who lived in Preston. His other relatives were all back in Ireland, in King's County (modern-day County Offaly).

Sarah was a witness at the inquest, stating she hadn’t seen her brother since Christmas 1897 and that he was in good health then. John Orange died intestate, but Sarah was approved as the benefactor of his £200 estate – the value of which led the papers to describe him as a ‘thrifty cab man’, £200 pounds being equivalent to over 30K in today’s terms. Perhaps another mystery there?